Oh, boy. Today seems to be the day to drop trailers for superhero series based on smaller non-DC, non-Marvel comics. First, we had The Umbrella Academy from Netflix, and now we have a decidedly darker series called The Boys from Amazon Prime Video.

I’m admittedly not familiar with the source material, but based on this first teaser, it definitely gives me a bit of a Watchmen vibe (though a proper Watchmen series is coming from HBO later this year). In the world in which this show takes place, there is an Avengers-like group of heroes called The Seven, but apparently, their public image is nothing but a front, and according to EW, “These heroes are using their powers to kill, pillage, and bully behind the scenes for the betterment of themselves.”

Ouch, this doesn’t sound too promising for the rest of the world, now does it? At least in Watchmen, most of these guys were fighting for something beyond their own self-interest — even if they completely disagreed on what that entailed.

The trailer itself isn’t bad. The budget for this series seems fairly high, and I’ve rarely been disappointed by anything Karl Urban has been involved with, so I may very well check this one out. But what do you think? Does this fit the bill for a comic book outlier for you to check out? Let us know your thoughts down below! 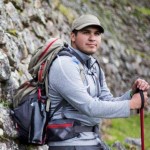