Comics To Check Out Before (Or After) Seeing The Batman (SPOILER FREE) I know many of you have already seen The Batman, like myself. It is an excellent installment into the franchise. If you are a fan of Batman in general, but especially the DC Black Label, it is the film for you. While many of us are well versed in Batman lore, average movie-goers may not be. I do not think you have to know all of the storylines and characters to enjoy the film. However, it can help. My wife came with me. She enjoyed it, but was lost with some of the characters. After watching the film. I revisited a few of the comics I would recommend if the average movie-goer is interested. They are also recommended if you are stilling flying high on the film and want to dive back in to some of the source material.

While director Matt Reeves reveals that the film is inspired from Batman Ego: A Psychotic Slide Into the Heart of Darkness, here are some that I recommend to review some character and plot points: Yes, the film focuses on the second/early years of Batman. However, there are elements in Frank Miller and David Mazzucchelli’s classic that can be seen in the film. Especially the growing relationship between Gordan and Batman. What I really enjoy about The Batman is how intricate Gordan is to the film. He and Batman are the closest partners we have seen on the big screen.

A variation of the the depiction of Selina Kyle/Catwoman in Year One can be seen in the film as well. The street-level, protector, survialist is definitely apparent in the Matt Reeves feature which is comparable to Miller and Mazzucchelli’s version. Some may question the incorporation of Batman: Year Two. While there are not a large amount of plot points in connection to the comic, it does depict the early stages of the Caped Crusader. Batman still questions his morals and exact role when chasing The Reaper. He even reverts to carrying a gun at one point until he realizes it is not what he stands for.

The questioning of his placement and role in Gotham is comparable to The Batman. Is he the shadows or is a beacon of light for the people? Can he be both? The Batman humanizes the characters in a way we have not seen on screen. The conflicting nature of Batman’s early years is definitely explored in the film. 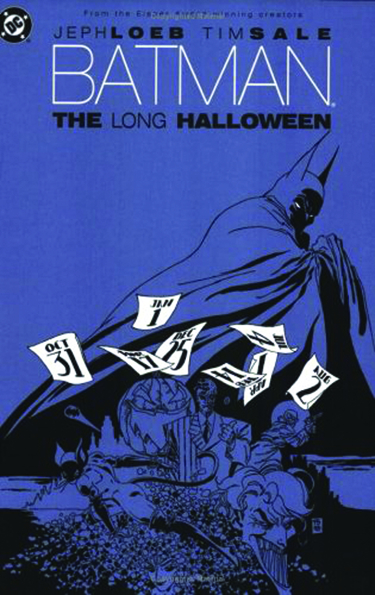 Tim Sale and Jeph Loeb’s masterpiece, The Long Halloween, is a work that many speculated Reeves would use for inspiration. For as many reviews that suggest this isn’t a superhero movie (per say) it is extremely close to source material. The main reason I suggest The Long Halloween (and my next choice) is due to the background and connections to the crime bosses. While Maroni is mentioned numerous time, Falcone is an intricate part of the film.

Not only does he play a major role, but there are aspects that mirror parts of The Long Halloween. This will help average movie-goers with how deep the mob runs in Gotham, as well as who is at odds with who. And if you already know, it’s just a damn good read.

Catwoman: When In Rome Catwoman: When In Rome is actually an extension of The Long Halloween and Dark Victory. While it takes place in the middle of those stories it is actually by Sale and Loeb, it is published in 2005. The story goes into more depth about the Falcone crime family while also giving more insight regarding Selina Kyle/Catwoman’s motives.

Batman: The War of Jokes and Riddles The last on the list isn’t necessarily just because The Riddler is in it. Sure that is part of it. However, the 2017 release of The War of Jokes and Riddles explores the idea of Batman’s impact. In trying to save Gotham has he actually harmed it? Batman comes to rid Gotham of violence and corruption. But, in doing so did it have an adverse effect and actually inspire/create the rogues gallery?

Some crossover elements with the film include Batman’s second year in the cape and cowl. There is also the budding romance between Batman and Catwoman, The Riddler bringing Gotham into complete chaos. and importantly, Bruce’s vulnerability. What makes The Batman so good is the humanizing nature. He is not a clean, polished Bruce Wayne with the inner demons. He wears his demons on his sleeve. Riddler even refers to the cape and cowl actually being his true self. Not who is underneath. In the film, The Riddler even suggests that Batman and he are to take credit, together for the chaos in Gotham. Batman/ Bruce is broken. We can see him working through that as the film progresses. The War of Jokes and Riddles sees this development as well.

ALSO SEE: Can Robin Exist In The Batverse? The Batman Director Matt Reeves Opens Up

This is by no means an extensive list. However, for average movie-goers, and those wanting a little refresher, I do feel these are great starting points. Are there any on the list you would replace? What would you replace them with? Have you picked up one or two of these in connection with the film? Leave your thoughts in the usual spot, and thanks for reading!

The Kenobi Trailer Is Finally Here And It Is Amazing