Marvel Has Done It – The MCU Is Bigger Than Star Wars Two weekends ago, Avengers: Infinity War hit theaters and the rest, as they say, is history. Thanos and company came in, kicked down the door, and broke hearts and box office records. While I was certain Infinity War would claim the crown for largest worldwide opening of all time, I was less certain it would be able to take down the previous domestic record holder, Star Wars: The Force Awakens. When the dust cleared, though, the Avengers and their purple-faced foe reigned supreme.

Now, as a slightly big Star Wars fan since the 90s and one who spent his formative years reading The Last Jedi Order novels and game-mastering a galaxy-spanning Star Wars RPG campaign, it pains me to say: the MCU is bigger than Star Wars.

For years, Star Wars has been the biggest franchise of them all. Its action figures in the 70s and 80s changed the way the toy industry worked. Its space-operatic aesthetics transcended sci-fi fandom. Fans continued to gobble up novels, comics, and game even during a decade-plus film hiatus. When the movies did return, box office sales exploded despite the divisive nature of the prequels’ quality. Star Wars didn’t stop to slow down even during another decade-long hiatus, filling pop culture with more books, television shows, comics and, finally, a triumphant return to cinemas with The Force Awakens. There was no film franchise that even came close to toppling Star Wars‘ place in our culture. Star Trek, whose fans are often put at odds with those of Star Wars, remained a niche fandom revolving more around the television shows than the movies. (J.J. Abrams’ revival of the Star Trek franchise a few years ago even had more to do thematically and plot-wise with Star Wars than its source material, many noticed.) The Matrix looked like it could have been “the next big thing,” but its sequels failed to hold people’s attention. The Lord of the Rings trilogy went bonkers but certainly didn’t have the wealth of tie-in products that make Star Wars ever-present in our lives. If anything, the Harry Potter franchise came the closest, selling bajillions of books but, for the most part, just missing out on the level of box office sales that would make it the Franchise King. In fact, domestically speaking, only one Harry Potter film would make it into the top five grosses of Star Wars movies.

Then Marvel became a movie studio. The struggling comic book publisher, who had declared bankruptcy in 1996 (owing more than a million bucks to, ironically, Disney), emerged to great success with 2008’s Iron Man, which scored a sweet $318 million dollars at the box office. The next four films would fail to claw back the same amount, and so Star Wars‘ place at the top of the franchise heap seemed secure.

Avengers landed next, making an insane $600-plus million and finally, heads began to turn. Amidst calls of “superhero fatigue,” Marvel continued to put out hits – only Ant-Man in the ensuing years would fail to earn at least $200 million in American theaters. 2017 was a string of incredible hits and this year, Marvel has doubled down with the phenomenal Black Panther and then, of course, Infinity War, which after just two weeks would be the fourth-biggest movie in the Star Wars franchise, were it to cross over. 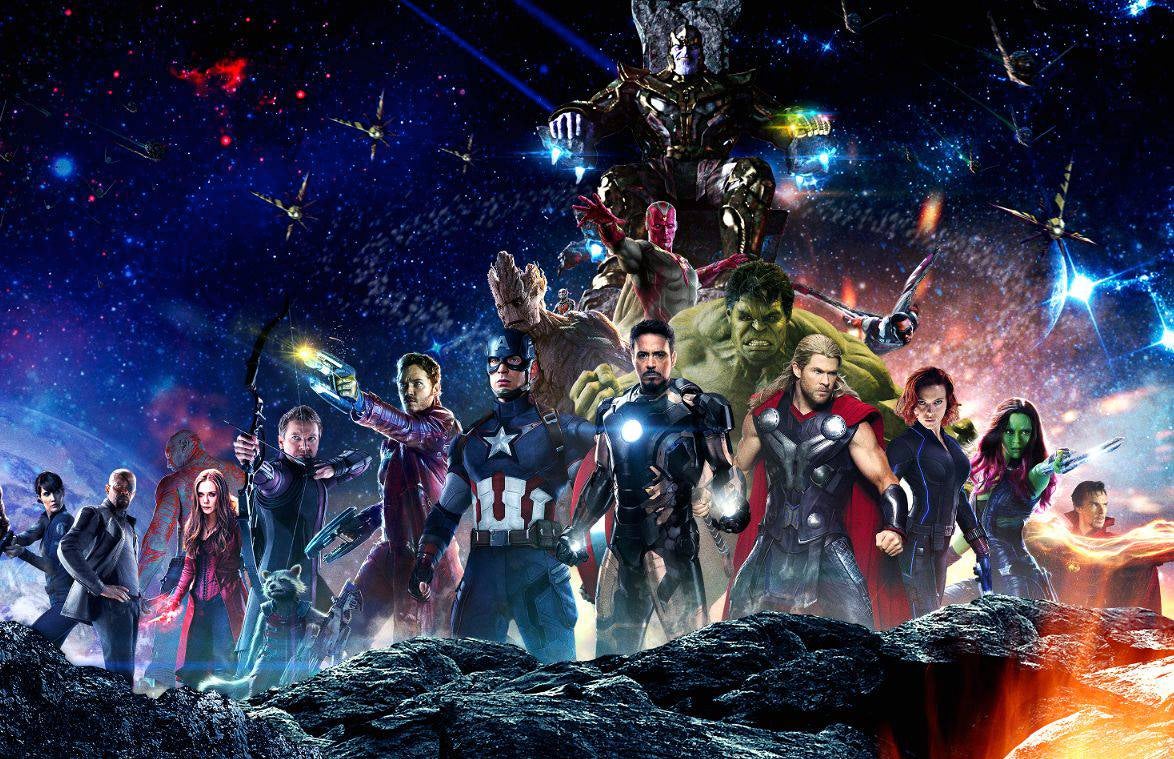 As a long-time observer of geek franchises, I’m ready to call the battle over: the MCU is bigger than Star Wars. Let me explain why:

Reason #1: The MCU is better prepared for the future.

If you look at upcoming movies in both franchises, one thing is abundantly clear: the MCU has a string of hits coming and Star Wars has … a big question mark. After Solo later this month and Episode IX next year, Star Wars fans only have the upcoming Rian Johnson trilogy to look forward to which, whether you liked The Last Jedi or not, was certainly controversial enough to second guess what might come out next. Then there are the movies coming out from the creators of Game of Thrones. That certainly doesn’t inspire confidence (not that they’ll be bad – they probably won’t be – but there aren’t any details whatsoever about these movies on which to rest a new hopefulness). Will we see the long-awaited Obi-Wan Kenobi anthology film? Nobody knows for sure!

Meanwhile, Avengers 4 is out next year. Captain Marvel is out next year. Even Ant-Man and the Wasp will likely make more money than the original. We’ve also (probably) got sequels to Doctor Strange, Black Panther, Spider-Man and Guardians of the Galaxy all in the offering. That sounds like a pretty solid slate of movies to keep fans’ appetites whetted. Reason #2: The MCU is a better product.

Star Wars releases one film a year and some people think that is too much. The MCU, meanwhile, tosses out three movies a year and makes more than a billion dollars in the domestic box office and some people, me included, think there’s room for a fourth! Every MCU film that comes out pleases critics and audiences alike. Fans love Infinity War, they raved about Black Panther. If you love the classic Marvel heroes, well you’ve got plenty of Spider-Man and Iron Man and Hulk to enjoy. Star Wars fans can’t even get themselves pointed in one direction. A huge portion of them can’t get past the original trilogy. Fans who loved the prequels are cast out from the main fandom. Then there are those who swear Rogue One is the best Star Wars film to date (with maybe the exception of The Empire Strikes Back). The great internet flame wars of 2017, started after The Last Jedi hit cinemas, are still raging in certain shady corners of the web.

Fans who don’t like certain Marvel movies – I have a friend who hates Black Panther – are on to the next movie in a few months’ time, smiling and buying up tickets, popcorn and sodas in line with everyone who loved it. Meanwhile, my love of Revenge of the Sith still earns me dirty looks from fellow Star Wars fans.

Reason #3: The MCU has this synergy thing figured out.

Like Black Panther? Great, because he’s already been in three movies. Robert Downey Jr. is hard to find absent from most Marvel films. Spider-Man is new to the MCU and has been in three films. If you only liked Guardians of the Galaxy, you’re inclined to see Infinity War because they’re there, too. The MCU simply has so many characters that fans are bound to like one or several in any given movie.

Perhaps the greatest sign that the MCU has surpassed Star Wars is this: Star Wars is now imitating the MCU in this regard. Not content to only release an episodic film every other year, Kathleen Kennedy and the folks at Lucasfilm began releasing anthology films two years ago with Rogue One. That film featured Mon Mothma, Grand Moff Tarkin and, at the end, Darth Vader – a clear ploy to please fans of the classic Star Wars films. Now, Han Solo, Chewbacca, Lando and others are going to attempt a tricky actor switch in this month’s Solo. If Lucasfilm pulls it off, they can begin pumping out film after film featuring the “further adventures” of our favorite heroes, all played by new actors. New characters to the franchise, a risky proposition, can take the Spider-Man route and feature in their own films while enjoying a few cameos from Boba Fett, Jabba, or good ol’ bad ol’ Emperor Palpatine. It’s the type of franchise emulation that only a Franchise King deserves and, in this respect, Star Wars admits its own inferior position.

Now, does any of this matter? After all, Marvel and Star Wars are both owned by the behemoth that is Disney, so from a financial standpoint, probably not. Both franchises are doing extremely well. But, as a huge fanboy, I want to see my favorite franchise on top. It’s a little like sports – I can appreciate other teams, but I want my team to be on top. Even more, I’m hopeful that Marvel’s dominance doesn’t indicate something foul at play in the Star Wars Universe. It’s not difficult to imagine that Disney will want to keep both of their money-making franchises in good shape, but if Star Wars begins to flag a bit, will the presence of the MCU mean that Disney won’t worry about letting the performance and quality of Star Wars fade a bit? Eh, probably not. Probably. But I’m a nervous fanboy in an age where the best of Star Wars fandom might be behind it.

What are your thoughts on this? Wanna make an argument stating that Star Trek is the true Franchise King? Just wanna flame The Last Jedi some more? We’ve got room for all of that in the comments section below!

Burt Reynolds, Kurt Russell, Tim Roth, And Michael Madsen In Talks To Star In Tarantino’s Once Upon A Time In Hollywood