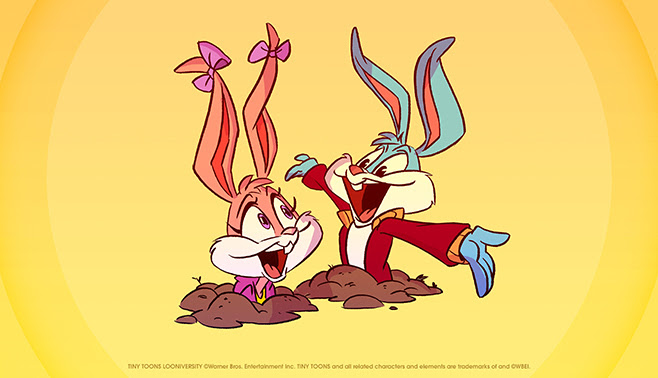 The Tiny Toons Are Back!

HBO Max is putting in work to make sure they have a wide variety of content on their streaming service. They have taken all of the original series from the DC Universe and have created much talked about series like Lovecraft Country and Raised By Wolves. For kids, they have even brought back a new version of the Looney Tunes.

Speaking of the Looney Tunes, there is another group of animated characters that are also ready to make a comeback. HBO Max and Cartoon Network are returning to Acme Acres with Tiny Toons Looniversity. This is an all-new half-hour animated comedy series. It features the characters from the Emmy Award-winning Tiny Toon Adventures from Warner Bros. Animation and Amblin Television.

Here is the description of Tiny Toons Looniversity that we received from Warner Bros.:

Babs, Buster Bunny and the rest of the gang follow their comedic ambitions all the way to Acme Looniversity, the esteemed institution of higher hijinx learning, where young dreamers become professional toons. Here they form long-lasting friendships with one another and perfect their cartoony craft while studying under the greatest cartoon characters in history, the Looney Tunes.

Sam Register, President, Warner Bros. Animation and Cartoon Network Studios said: “For many kids, Tiny Toons was their introduction to the world of Looney Tunes and, over time, Buster, Babs, Plucky and all the characters grew to be just as beloved by an entirely new generation. The continuation of our great creative partnership with Amblin Television will bring these characters back for fans of all ages to enjoy.”

Are you excited to see the Tiny Toons back on television? Let us know in the comment section below!

Meatball Machine | 50 B Movies To See Before You Die