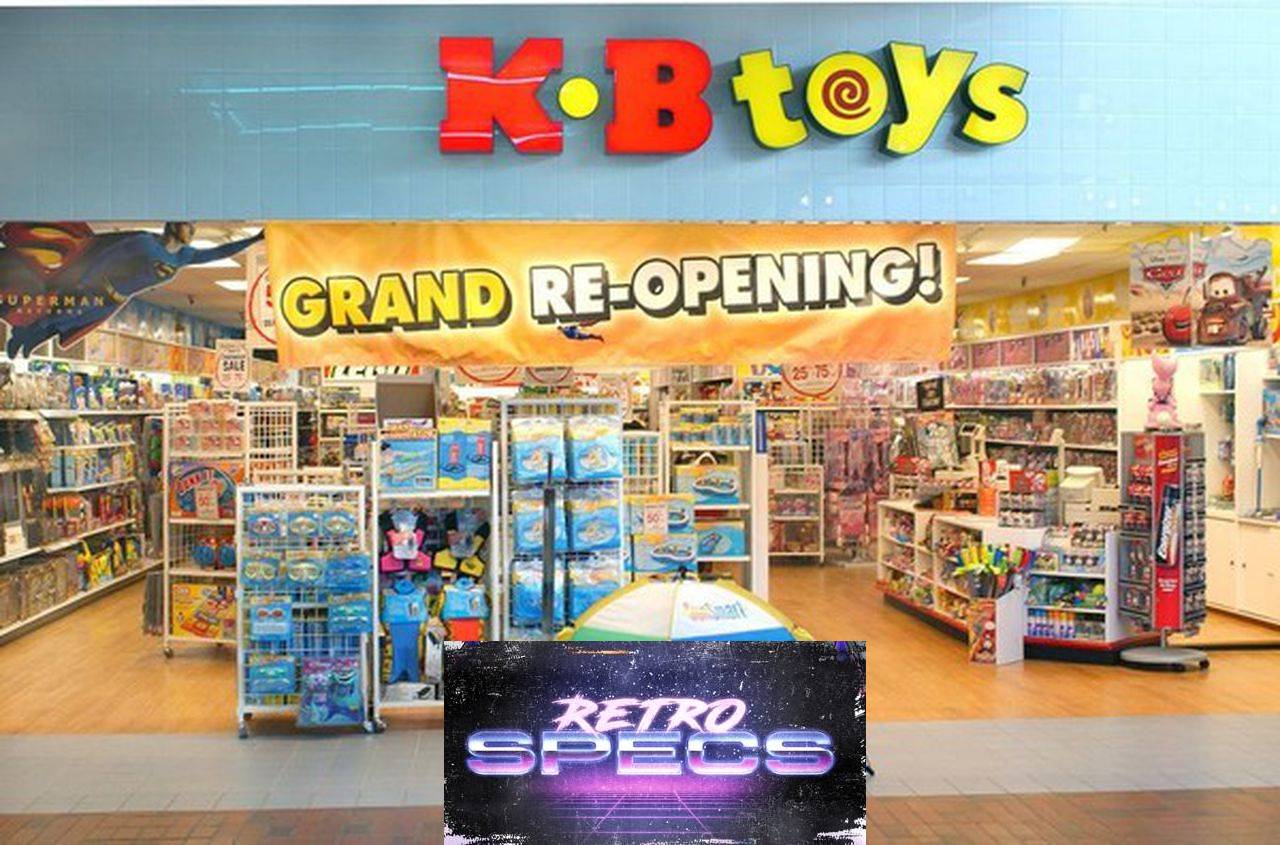 Welcome back to the September installment of LRM’s Retro-Specs! Imagine for a moment that it’s the 80s and you are heading to the mall with your family. You’re a kid so there are only a few stops you want to actually make. For me, I knew I would be going to stores with my mom such as JC Penny, Sears, and Lazarus. Outlasting these stores was always worth it as I knew I would be able to eventually go to the arcade and, my favorite, KB Toys!

Sure I love going to Toys R Us and Children’s Palace, but something about KB Toys feels more accessible. Maybe it’s because of their placement in a mall so it is more likely families would go to a place that has something for everyone more often than a standalone toy store. Due to the rise of the internet and online shopping, the toy store chain meets its demise. Let’s take a look back at the standout place in any mall: KB Toys.

The idea of the well-known toy store chain goes back to the 1940s. Candy business brothers Donald and Richard Kaufman decide by 1948 that their toy company is successful enough to leave the candy business behind. By 1973 the company dons the name Kay-Bee Toy & Hobby having 26 stores. In 1981 is when the store begins to really explode when they are bought by Melville Inc. and have 210 locations. From 1982-1991 they acquire Toy World (52 stores), Circus World (330 stores), and K&K Toys (133 stores).

By the mid 90s, Kay Bee Toys expands their mall locations and adds free-standing locations. Here is where they become direct competitors to the toy store giants such as Toys R US. They end up making sales from $1.1 – $1.6 billion annually! In 1998, the logo changes to KB and their website, KBkids.com, premiers. All seems well for the toy store chain. Unfortunately, this is the rise before the fall (more on this later). Obviously the best part of every toy store are the toys. However, there is something else I always found so intriguing about toy stores growing up. It may sound odd, but the layouts of the stores are something that I can specifically remember. KB Toys is no exception. Of course depending on the store the layouts will slightly differ, but the general idea is the same. I would go through a majority of the aisles, but there is always going to be that one seemingly catered just for you.

For me, the video games were housed behind the cashier of course. Some of the newer, larger toys are near the front. But my main priority is the aisle that was the second from the right at the store I would frequent. It houses the likes of TMNT, Super Powers, He-Man, X-Men, etc. The hidden gems such as Army Ants, M.U.S.C.L.E., Battle Beasts, Supernaturals, Visionairies, Dino Riders, M.A.S.K., etc. are found here as well. What sets KB Toys apart from the other, larger chains is that due to its smaller size you always have an attendant close by to ask your millions of questions to (much of which they probably didn’t know since many were probably in high school trying to make some money). At the larger chains you would have to walk around trying to find someone if you had a specific question (first world kid “problems”). The reason why I lead with this is because I was always more prone to ask questions at KB toys. About what? My other favorite part. Before the internet we had minimal ideas of when new toys would be coming out. Advertising was good, but general. For instance, a new TMNT character could be coming out, but a flier may show the typical turtles and display their price. I always looked forward to the backs of the boxes. This is when you could find new lines that were coming out. You may not know exactly when, but it does provide an indication that they are heading your way!

This is where I would utilize my questioning for the KB Toys workers. At times they did have some of the inside track. Really, this perk was more of convenience. I would still scour the larger stores to find someone to ask (I was that annoying kid). After getting my fix from my aisle, I would peruse the other four or five aisles quickly at the urgency of my family wanting to leave. The blue and red colors makes the store stick out not only from walking by outside, but when you are inside KB toys as well. It is a world of its own. The anticipation of checking the newspaper fliers seeing commercials leads to a small feeling of Christmas morning when eventually approaching the store. Like the other big name toy stores, the rise of online shopping is a primary cause for the sad downfall of the company. However, there are other reasons that accompany this. In 2000 the company comes under the control of Bain Capital LLC. Between 2000-2007 the company struggles to stay afloat. In 2004 KB Toys files for bankruptcy protection and closes 600 stores and lays off over $3000 workers. As this trend continues, the company takes 200 stores in 2008 and announces they will be a value store with toys $10 or less.

As the company is in decline, the recession only magnifies the issues. On December 11, 2008, KB Toys liquidates their assets while filing for bankruptcy. The moving forces of the recession and online shopping becomes crippling for the once toy store giants.

Don’t Call It A Comeback? For those who love nostalgia, like myself, the closing of Children’s Palace, KB Toys, and Toys R Us was truly sad. Closing them also closed the door on parts of our childhood. While Toys R Us grasped at their last straw and eventually had to close, KB Toys raised our spirits, if only for them to be crushed again…While Toys R Us closes in June of 2018, KB Toys reveals they will be opening pop-up stores in time for the holidays of the same year.

Excitement ensues, but would be short-lived. Ellia Kassoff was the CEO of Leaf Brands and Strategic Marks, LLC. In 2016 he is the owner of the KB Toys trademark. There are promises that 1000 pop-up stores will be added, however the holidays pass without this claim becoming a reality. While it is initially touted that malls are backing the concept, the lack of follow through is due to a lack of funding. “The toy companies had lots of conflicts of interest that prevented them from investing in KB given that they sell to other retailers, and mall operators don’t typically invest in prospective tenants. It is taking a while to get this done and build out a strategy. Once we get the money together, we will be off and running.”

The money never comes. Unfortunately, there is much more bark than bite and we find disappointment yet again. There is still whispers that the reemergence of KB Toys, and other since defunct store chains, could come back to life. I’m not holding my breath though.

Did you have a KB Toys near by? What is your favorite memory from the store? How do you rank the store against the other big toy stores? Leave your thoughts in the usual spot, and thanks for reading!