Move Over Happy Meals. Pizza Hut Merch. Is Where It’s At! I LRM’s Retro-Specs If you are an 80s/90s kid, you know McDonalds always dominates the food and toy combo. I mean, they have their own Transformers/ Changables! Other big chains such as Burger King have some hits (The ALF and TMNT lines are my personal favorites. Even Wendy’s fairs well at times. However, there is one that really gives McDonalds some competition back in the 80s/90s. Pizza Hut merch. is the real deal! 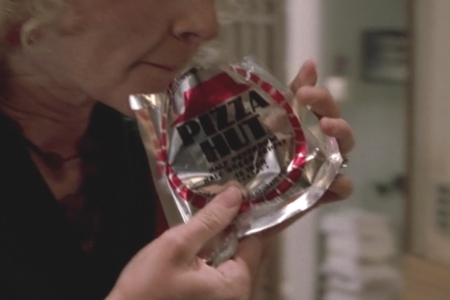 I was watching a Back to the Future marathon the other day. When you see a film for the thousandth time you begin to pick up on the details. I was checking out their “futuristic” cloths for Part II and remembered I had a pair of those sweet sunglasses! Where did I get them? A Pizza Hut tie-in! Not long after that there was an awesome Buzzfeed article about it.

I think what makes the merchandise so good is because, as a kid, it seemingly comes out of no where. The other chains you expect. However, I would roll in to Pizza Hut on a Friday before TGIF to get my Book-It! personal pan and a Crystal Pepsi and BOOM! Pizza Hut has some type of tie-in out of the blue. Distance makes the heart grow fonder, right? Let’s take a look back at some of the best Pizza Hut merch. that really gives the other chains some competition!

In the 80s and 90s for whatever reason Pizza Hut‘s go-to is hand puppets. I definitely have Ducky and Littlefoot from the series. In typical 80s/90s fashion, the material smells like death and doesn’t even move much. The arms kind of move and the neck. But you know what? Many of the kids in my area had these. I even remember some bringing them to school. I really do feel that when trained for kid’s meals, Pizza Hut‘s random (to me as a kid) tie-ins made us “have to have” whatever they are selling! There is also a Casper series of hand puppets as well as a series for Beauty and the Beast. While I do not have any from either series, hand puppets were all the rave. Who remembers Eureka’s  Castle? This show is awesome! (Could be a future Retro-Specs piece). It is somewhat like Sesame Street for Nickelodeon. We all love the Henson-style puppets, so it only makes sense that Pizza Hut has a hand puppet line as a tie-in! I am pretty sure I have Batly (only 99 cents!).

TMNT “Coming Out Of Their Shells” Cassette!

If it’s the 80s / 90s and you aren’t joining the TMNT craze then you will be left in the dust. Pizza Hut of course jumps on board. Before Vanilla Ice and “Ninja Rap” there was the “Coming Out of Their Shells” Tour. I even went to it. That’s right. My first ever concert. Now, coming in for your personal pan, how in the world could you pass up the official cassette, movie poster, AND tour book. Pizza Hut goes above and beyond the usual kid’s meal toys. If you have never seen the tour, check it out. 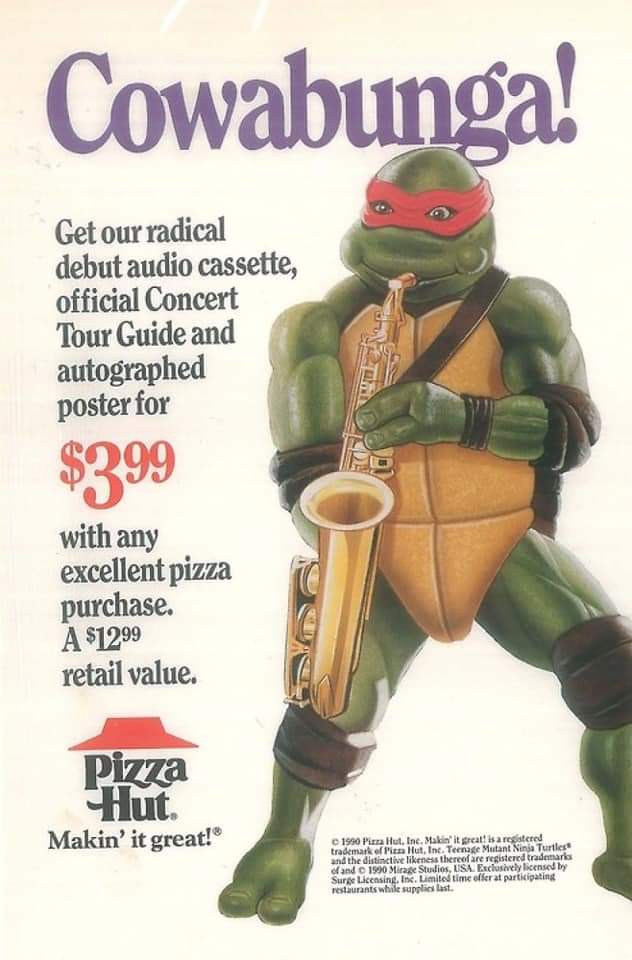 Back to the Future II Solar Shades!

Only $1.99! Too good to pass up, right? I remember wanting the coveted Solar Shades so I could look so cool. I did end up getting a pair, which I think are the best. The one’s below in the middle row made me feel as if I could have (and should have) been in the film! At first Pizza Hut sold the mini-basket balls which are still cool as hell, but then came the release a full-size basketball. ONLY $4.99 with the purchase of a pizza. Everyone in my area had these. And that line, “Hey chumps, want a game?” would be used constantly following the commercial. With the streetball, while 90s awesome, you get your money’s worth. It is an absolute must-have. However, if you had one you know that it quickly becomes lopsided, runs out of air, and the grip fades. Each time you played you would leave with your hands being completely black from the color rubbing off on. BUT, that never stopped us from pumping the streetball back up for more adventures. I am pretty sure it still sits, deflated, in my parent’s garage as a Pizza Hut relic. I may be biased, but the Pizza Hut merchandise from the 80s/90s will always be the best. However, this does not stop them from continuing the trend. The Star Wars: The Phantom Menace cups and tie-ins are another feather in Pizza Hut‘s cap. I definitely have the Yoda cup. You could even get an awesome behind the scenes CD-ROM which probably required DOS mode on a computer. Pizza Hut keeping up with the times. In 2016 they have TMNT plush dolls that fans could buy. Now they are still rolling strong with the TMNT trend by adding Mutagen Ranch pizza as late as this past March! I never tried it, did you?

RELATED: McDonalds Style Transformers And Pizza? Grab Yourself A McPizza And Hope For A Changables In Your Happy Meal! I LRM’s Retro-Specs

While Pizza Hut did not invent the merchandise tie-ins, nor were they as consistent as other fast-food chains, their merchandise is different. That’s what makes them stand out and a must-have for all fans and pizza lovers. What is your favorite Pizza Hut merchandise? Do you have any that are mentioned? Are there others you enjoy more? Leave your thoughts in the usual spot, and thanks for reading!

We Have Demons #1 Review: The Comic Source Podcast