Rick and Morty Scribe Says Writing On Season 7 Is Underway There was a time when the wait for a new season of Rick and Morty rivaled the time between A Song of Ice and Fire novels. Alright, maybe not that long, but a good long wait it was.

Well, loyal viewers of Rick and Morty need suffer no longer. As Michael Scott so ineloquently illustrates below, things sure have changed. 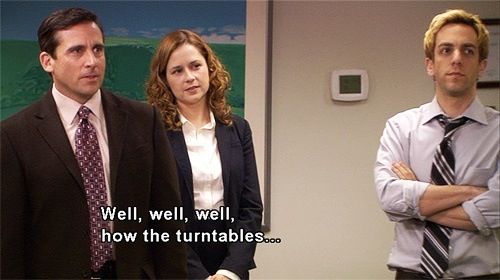 (I know it doesn’t really make sense, but that’s what makes sense about it)

Once AdultSwim stood up and put a ring on it, with a huge 70-episode order, the series production has been running much more smoothly. While Season 4 had somewhat of an extended hiatus midway through, there shouldn’t be any more years-long waits between seasons.

Rick and Morty writer Alex Rubins revealed in a tweet the team has begun writing Season 7.

Am I allowed to say we started writing Rick and Morty Season 7? (If not we didn’t and I’m not)

Impressive, most impressive. I’m glad to see no hiccups have made their way into the refined production. Season 5 is coming soon, when exactly? That is not yet known, and what you’ll find below should up the hype to levels that shouldn’t be possible.

Writer/producer Scott Marder also teased Seasj 5 will have canon of the mind-blowing kind. You can check out what he had to say while speaking with NME  below.

“There’s epic canon in season five coming. Fans are gonna, like, get knocked over by the canon we’re about to hit them with… All the stuff we’re doing is so awesome.”

What are your thoughts on this Rick and Morty update? Let us know in the comments down below!