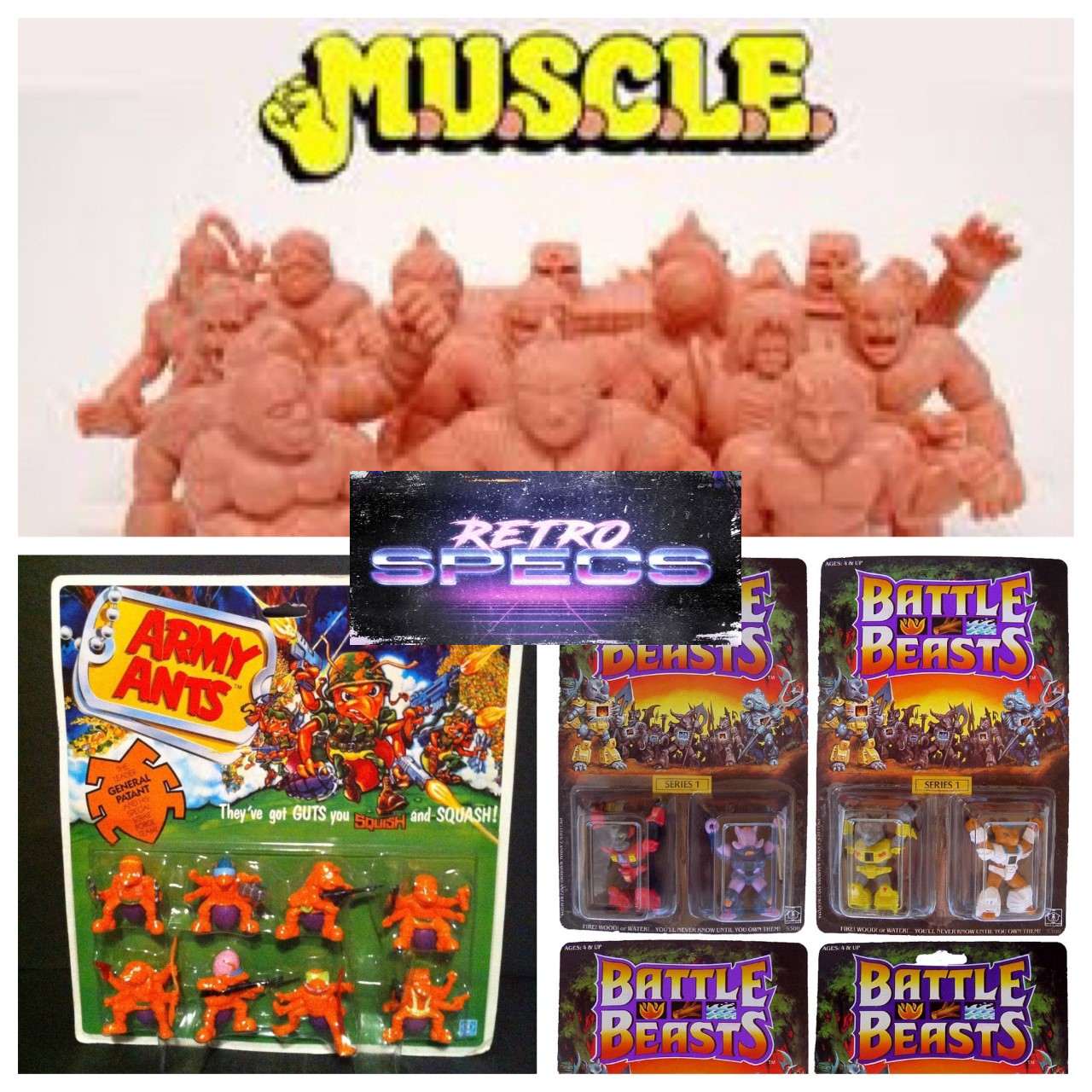 Welcome back to the August installment of LRM’s Retro-Specs! In the best era of toys, they were made in all shapes and sizes. Most will fondly remember the rise, and popularity, of Micro Machines. This is a time when a minor disclaimer (don’t eat these) would suffice as a warning. 80s miniature toys are loved by all because of the number of figures you get for the price! While Micro Machines are the most well known, there are some other clear 80s miniature toys that should be favorites in the form of M.U.S.C.L.E., Battle Beasts, and Army Ants!

The 80s is the age of awesome toys, WWF (WWE) popularity, and enormous action heroes. M.U.S.C.L.E. figures fit the trends. One may not think they are that popular. They are well detailed, they look unfinished. There is absolutely no color addition (aside from their standard pink), but each figure has extreme detail which gives them their unique looks. The cool thing is that because of their size you could fit numerous figures in small bags, boxes, etc. and easily take them to school, or a friend’s house. 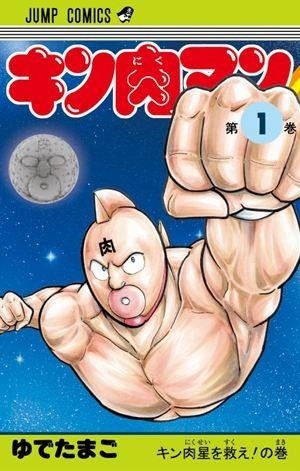 The figures originate from a manga from Japan in 1979 known as Kinnikuman, which means “Muscleman”. The manga originates as a parody for the likes of Superman and Ultraman. As the series progresses, the characters take on an intergalactic wrestling theme with their own specific finishing moves. The issue is that the lead character is pretty much an idiot.

The character’s names are along the lines of comic heroes using the attribute + man. The manga leads to an anime series in 1983 and toys from Bandai. The two inch size and using the original pink plastic coloring helps keep costs low. The size of the toys, low costs, and collective aspect of such drastically different looking characters, popularity booms. 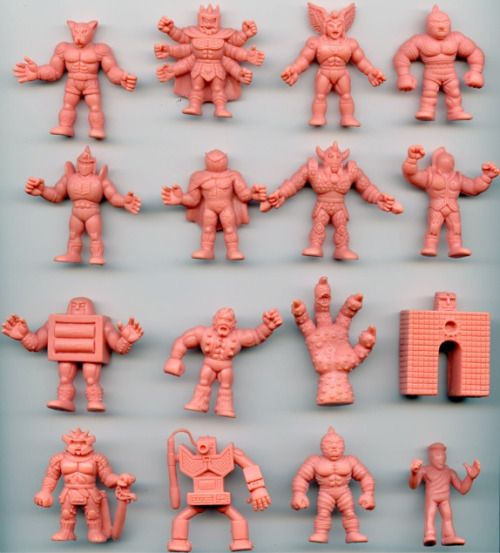 In 1985-1986, America gets on board. The anime does not make its way over, however the Mattel brings the toys and rebrands the name to M.U.S.C.L.E. (Millions of Unusual Small Creatures Lurking Everywhere). You have to love the 80s acronyms.

Again, because of the size and low cost, figures mainly come in a four-pack for around $1! A 10-pack is around $3 and a 28-pack sets you back a whopping $7! No wonder they are so great! The first few 28-packs have factions. The good guys are the Thug Busters and the bad guys are the Cosmic Crunchers. Releasing these cheap toy factions makes for unlimited possibilities for playing!

Of course the toy line comes with accessories. From the Hard Knockin’ Rockin’ Ring Wrestling Arena to the Rock’em, Sock’em Robots, affordability is still the key. The ring sets you back about $9.99! There is also the Battlin’ Belt carrying case which holds 10 figures around your waist! This is something I have and when growing up brings major cred. with friends. Around 1986 a board game comes out as well as a NES game of course (which is pretty bad). Also in typical 80s fashion, if you mail in two proofs of purchase can receive the M.U.S.C.L.E. mail-away poster! The toys eventually progress to having some color moving away from the pink plastic. 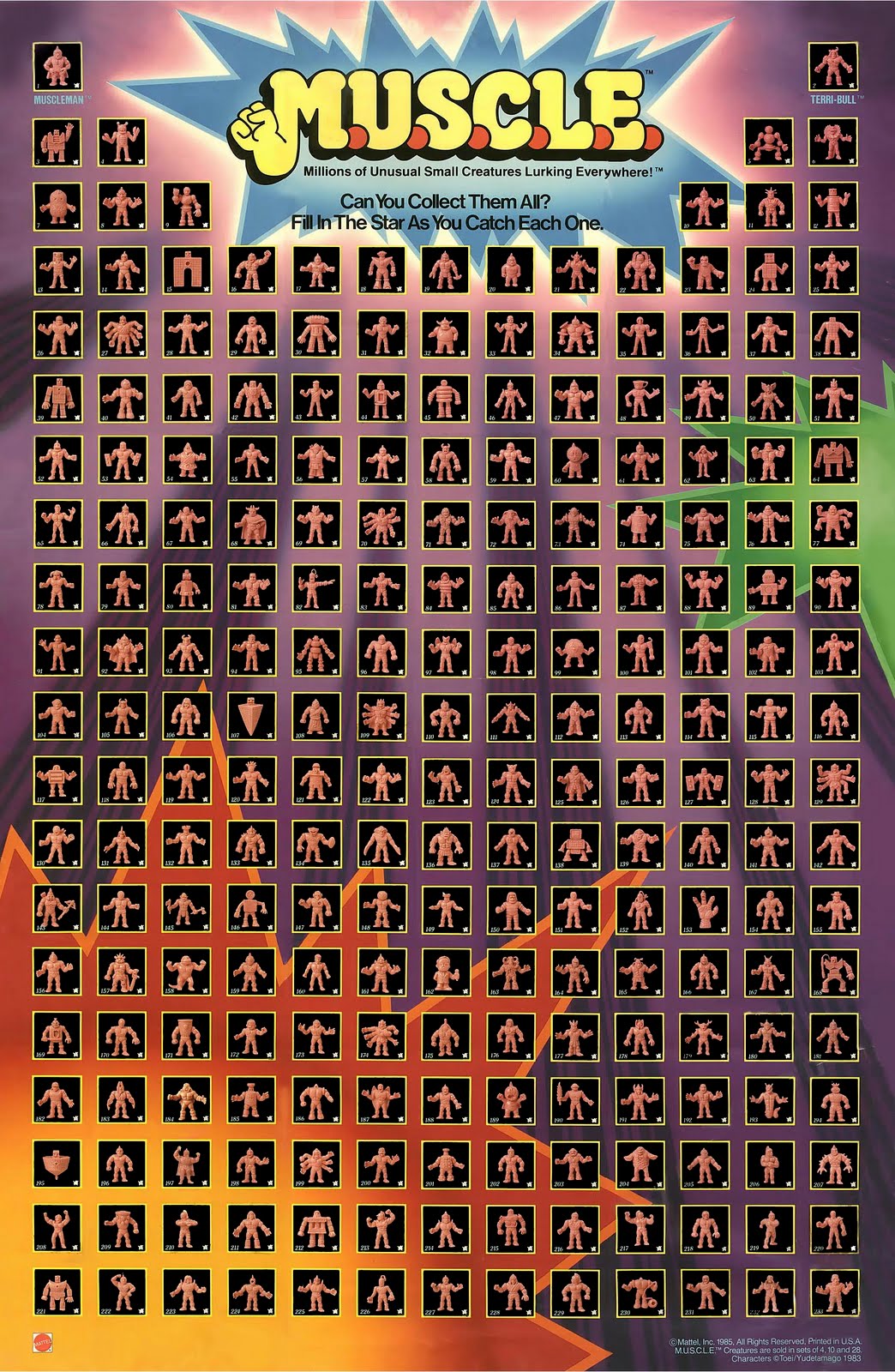 In 1986 it makes the top 10 list for best selling toys. The downfall of the line comes in 1987 with the release of the NES. Many toy lines hit a wall in the 80s when the NES premieres and completely changes the video game, and entertainment industry. Combine this with the fact that M.U.S.C.L.E. are not completely owned by Mattel, and some revenue still is given to Bandai, Mattel did not view the line as a primary line. Looking to make up lost revenue, M.U.S.C.L.E. discontinues in 1988.

We all know Transformers are the rulers of the 80s when it comes to toys. Most companies look to find ways to replicate the same success. While the miniature figures are relatively new at this time in the US, Japan establishes the unique concept. In 1986 Japanese toy company Takara creates Beastformers. The toys are two inches tall, a great design, and are animals in an anthropomorphic figure. Takara creates the toy line to actually connect with Transformers and be a spin-off to ride on their success. 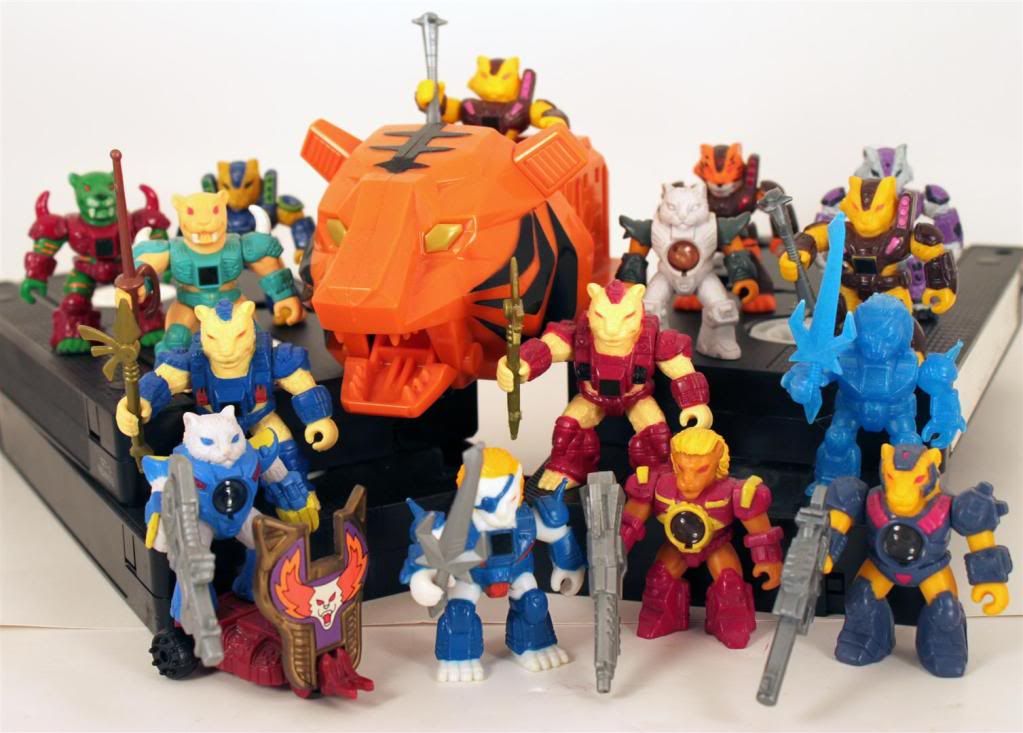 This is where the name Beastformers comes from. Takara works with Hasbro to become the American seller of the toy line. Hasbro disregards the connection and changes the name to Battle Beasts. This is a shame. I think it would have been awesome to keep the connection to Transformers! By 1987, Battle Beasts hit the shelves in the US.

The actual genius behind the success of the toys is the easy childhood game connection that everyone knows. Like so many great 80s toys, Battle Beasts have stickers on their chests that are hologram like. Applying the heat of a finger reveals which group the character belongs to: Water, Fire, Wood. This is reflective of rock, paper, scissors.

The idea was to get your characters together and choose who would battle who. Only then would you press your finger to the sticker to see which element is represented. Wood beats water, waters beats fire, and fire beats wood. 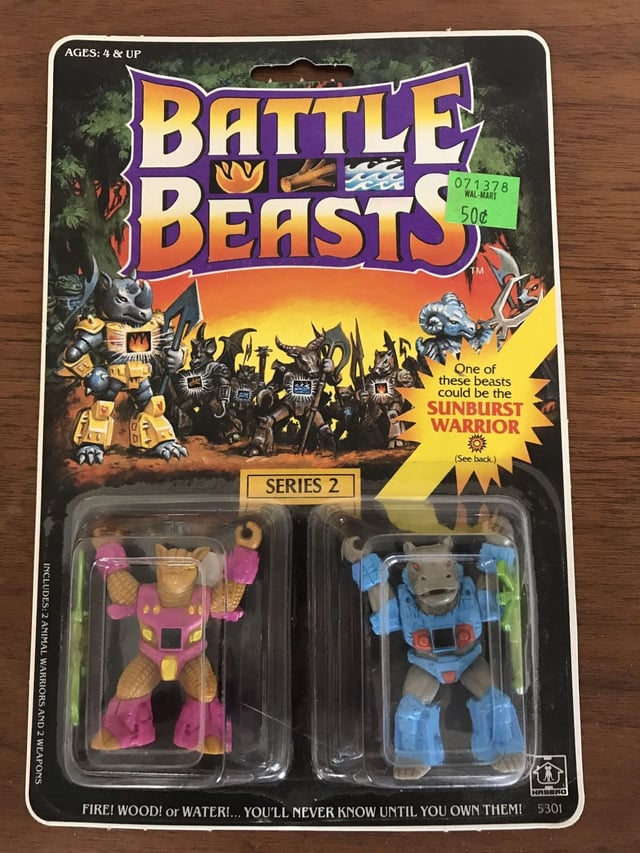 At one time there is an unbeatable symbol known as the Sunburst. They are not easy to find. However, the Sunburst is an automatic win! The idea is to play with friends, so even if you knew your own characters and their symbols, you would not know your opponents. I remember a good deal of these being traded due to who won or lost. It really is such a cool concept!

Like any good toy line of the 80s, of course there are weapons, and vehicles known as chariots and playsets. Each character has their own weapon that comes with them. While I do not have any of the playsets, I do have the Battling Tern’ Tiger and Battling Big Horn. They are small in size as well, but a few characters can fit on them. The playsets, or “bases”, are similar, but can open up for the characters to be on the inside as well as the outside. 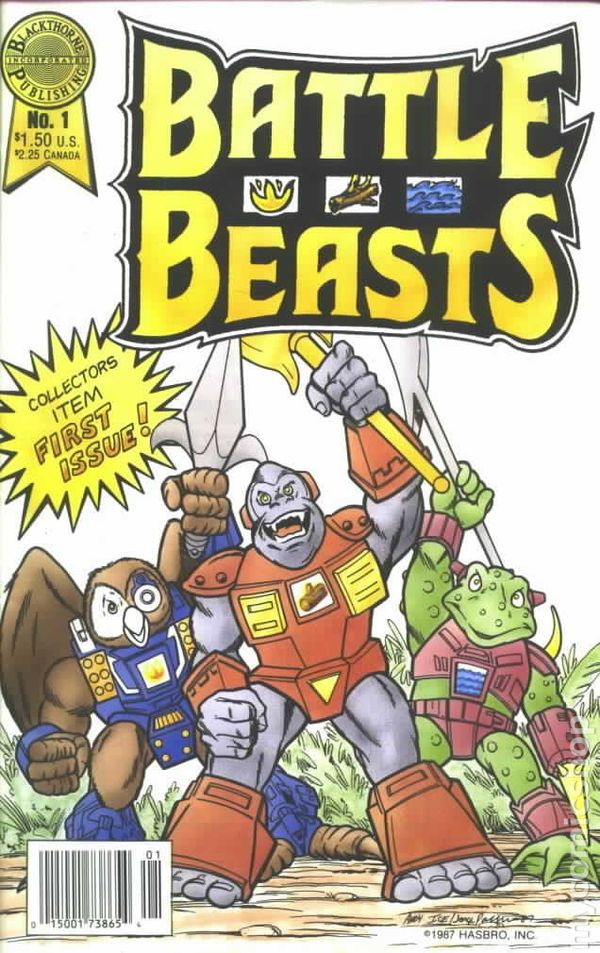 There is a bandolier which is a belt that holds a number of the characters, Of course this is necessary when going to battle some friends! I mean, who wants to carry them, right? There is even a short comic (only four issues) from Blackthorne Comics in 1988. It is canceled on a cliffhanger as well. While there are some revivals in 2009, 2011, and 2012, nothing beats the original Battle Beasts!

Battle Beasts see 76 characters across three toy series. However, not all are easy to find and at times depends on the country an individual lives in regarding the availability.

Rounding out the badass 80s miniature toys to remember for this column are Army Ants. This line may not be as memorable for some. However, I think they are awesome and deserve a spot with the other great miniature toys. Hasbro releases the line in 1987 and they are humanoid ants. Again, the great concept with the smaller toys are that you get more for your money! 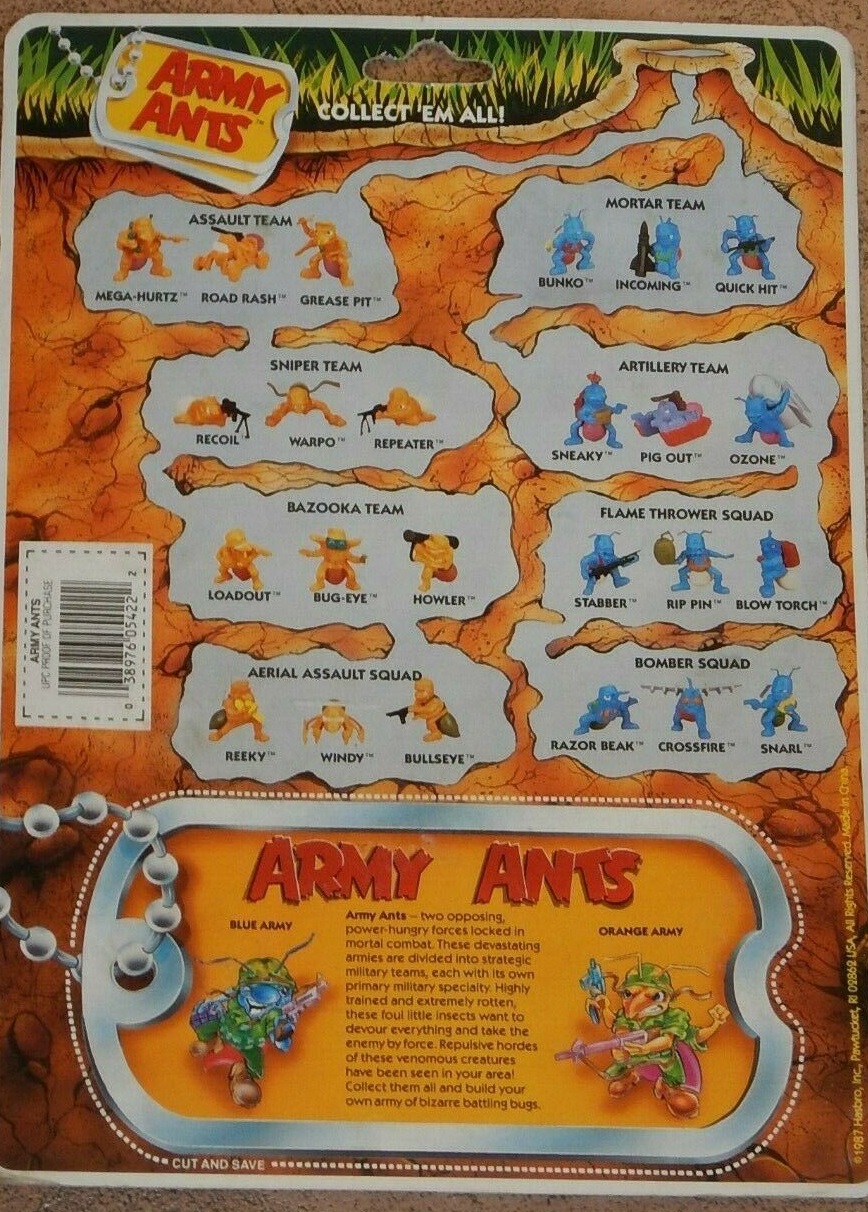 Army Ants figures come in packs of three or eight! They are not necessarily the typical good and bad. They are either in the Orange or Blue Army. What is also cool about them is that, like the military, the Army Ants figures fit into sub-groups within their army such as: Assault Team, Sniper Team, Bazooka Team, Flame Thrower Squad, Ariel Assault Team, Mortar Team, Artillery Team, Bomber Squad, and Special Forces. 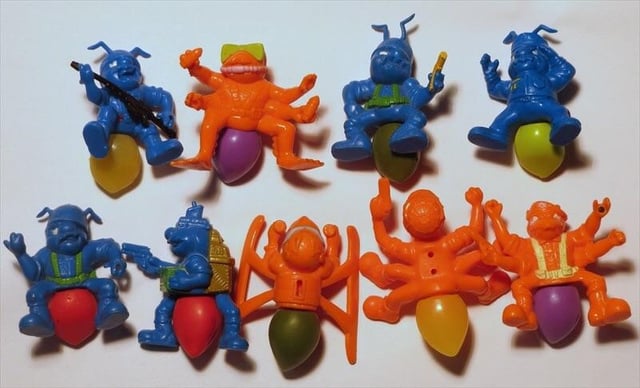 There are a total of 40 figures. 20 for each side. The Army Ants have detail for their small nature and some have a weapon, or moveable parts. Unfortunately, there is only one line and are not deemed as successful as the others. I have a feeling not having a tie-in comic, cartoon, and in a market of other miniature figures, and amazing other toys, is why Army Ants may be left in the dust.

However, I still really appreciate them. If you had army men growing up, they are pretty much an updated equivalent in ant form. I would often take all of my miniature figures and bring them together for giant battles. Oh the fun of being an 80s/90s kid!

Also See: “Earth To Everyone!” The Best 80s Alien: ALF! I LRM’s Retro-Specs

Do you remember the awesome 80s miniature toys: M.U.S.C.L.E., Battle Beasts, and Army Ants? Which are your favorite? What accessories/merchandise do you have? Should toy companies bring the back or keep them in the past? Leave your thoughts in the usual spot, and thanks for reading!