Well, here is my The Wheel of Time Episode 7 review! I loved this episode, or at least 95% of it. However there was one real negative for me that I’ll get to below as well. First though let’s talk SPOILERS, or at least spoiler policy. This review will have spoilers up to and including The Wheel of Time Episode 7. Other than talking about a few changes from the books, there will be NO Book SPOILERS in this review. With all that said, let’s get into things. Oh, and we have a reveal of who the Dragon is so don’t read this until you’ve watched Episode 7 on Amazon Prime.

The Wheel of Time Episode 7 Review Episode 7 starts with the journey through The Ways, a mysterious way to travel long distances in a much shorter space of time. I really enjoyed The Ways in the books, and whilst this section is much shorter on the show, and initially I felt that, I have since resigned to admitting it was correct to shorten this section a little. The Ways are not really the place for having long deep conversations and as such I liked the focused nature of how it worked in the show. Machin Shin was different from the books in terms of how it taunts, but I also felt those taunts were more personal and anxiety inducting for the characters than they were in the books.

The look, and feel of The Ways did remind me of the books, and the only thing niggling me was the idea that you had to Channel to get in and out of The Ways. However, since we also saw a certain character following the group and leaving The Ways after them without the ability to Channel, I guess there is more to come on how they work? As for the whistling and then that quick shot of Fain in the distant shadows briefly illuminated by the lightning? Chef’s kiss.

I loved Fal Dara and the residents, I loved the performances of the cast, and an episode with almost no action remained tight and tension filled throughout. I think the whole point of Episode 7, from that cold open to the end, is about exploring who and what the Dragon Reborn is. What I loved is how they showed non-book readers some of the little teases that the book readers will have caught throughout the season. Surely a penultimate episode which makes audiences want to go re-watch the full season before the finale has to be doing it’s job well? The Blood Snow cold open was amazing, and I loved how brilliant at fighting Tigraine is. Considering she was nine month’s pregnant at the time, can you imagine what the other Aiel will be like when we eventually see them?

I also thought the pacing of how Rand is revealed to be the Dragon was excellent. That fever dream of Tam, was in the opening few chapters of the book. Hopefully now, non-book readers will see why Rand’s identity as the Dragon wasn’t hidden much to the readers in book 1. Rand is by far the most used PoV in book 1, and with a book those hints at Channeling were a bit more obvious. Added with Tam’s fever dream and telling Rand about the Blood Snow incident much earlier. However that’s the reader, the characters go through essentially the same journey and Rand’s realization happens around the same time as the show, even if slightly different.

RELATED: The Wheel Of Time Episode 6 Review | The Dragon Reviewed NO Book SPOILERS

Did you spot the moments when Rand Channeled? Well here’s a few more less obvious ones to watch back for. Early on (I think Episode 2) when Moiraine is healing the horses, she leaves Rand’s alone. Why? because he has been healing the animal himself, though Moiraine does not realize that yet. Moiraine simply thinks Bela does not need a boost like the others. Secondly, when Moiraine talks about how strong Matt must be to have survived so long under the influence of the dagger, who do you think was keeping him from slipping? Yup.

Add this to the more obvious signs like Rand breaking down a door Dana said it would take 3 men to break, plus this week’s Channeling in The Ways to kill that Trolloc. The way the show introduces the weaves only when you see things from Rand’s PoV is absolutely perfect as no one in the company of him either time would have been able to see those weaves save himself or another male Channeler like Logain. I guess now you know who Logain was really looking at and laughing in Episode 5?

Audiences have seen the One Power wielded, but just wait, because what you will find is that outside of Nynaeve we have only so far seen relatively weak Channelers, and Rand himself is the most powerful Channeler that ever lived.

Love is in the Air 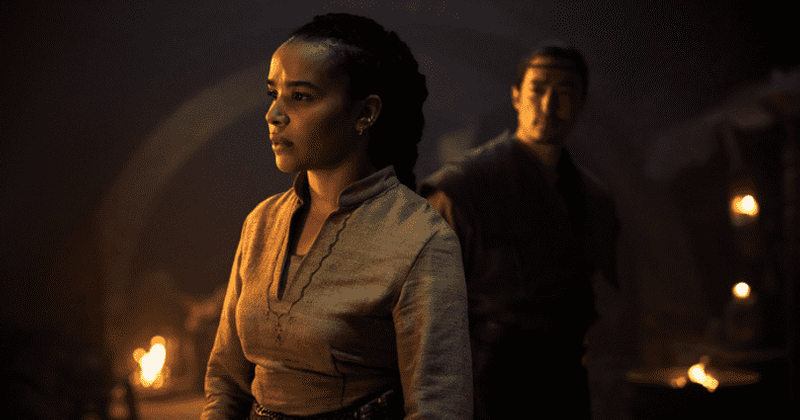 Ok, so Nynaeve and Lan do get it on in the books, but not till some time later. I absolutely agree with the showrunners here that introducing this romance earlier is essential. Not only does it show the doubts Moiraine is starting to have, it explains in the show why she leaves Lan and the others behind, going only with Rand. However, I predict a complicated road for this couple as Lan is still currently Moiraine’s Warder and that lasts until either one dies or she willingly release the bond. Nyn won’t love that will she?

However, there was one love angle I despised in the episode and it’s something not even hinted at in the books. The silly pseudo love triangle between Rand, Egwene and Perrin. This seems like something that was cut from the opening episode and then they tried to bring it back. I’ve been chatting with fellow book fans since this ep dropped and I can tell you this Amazon. I have not come across a book fan yet who liked this change and we all want it dropped going forward. If Rafe (Judkins) is reading this, (hey why wouldn’t he be?) then drop this like a hot potato, please. There is no way they are going any further with this anyway.

I won’t spoil anyone’s story, but Perrin and Egwene from Book 2 onwards rarely spend much time together again. Their path’s simply go in a different direction. I just therefore cannot see why this faux love triangle was introduced? It added nothing to the episode and adds zero to the overall plot of the books. Unless the show goes off in directions the book never touched I just feel like it was silly. To the point where that moment alone took me right out and made me annoyed. The first significant change from the books that has annoyed me as a fan so far. As said in the title, if not for this moment, I think this was an A+ episode, but it’s not.

The design of this episode was just beautiful. The Ways, Rand’s reveal, and I have to pay special note to the design of The Blight. That’s that weird decaying vegetation we see Moiraine and Rand head into at the end. In the books there were patches more like this, but also just desert and sand a lot also. The way the Blight looks in the show really helps to visually capture I think what Robert Jordan was trying to describe. It’s a horrible place that Human’s should really not venture into unless prepared for danger.

Next week’s finale should be exciting and truthfully I’m not 100% sure what happens. Yes, The Eye of the World is the name of that first book, so they go there. However the whole gang goes and in this turning only Rand and Moiraine are heading there. My guess, and it’s not spoilers folks, it really is just a guess, is that Fal Dara will be attacked. Whether that attack comes from the Waygate or the Blight I’m not sure, but we know Padan Fain is there. When he is somewhere it’s rarely long before Trollocs show up. I think Perrin, Nyn, Eggs and Lan will have to help defend Fal Dara, keeping them too busy to run after Rand and Moiraine, but I could be wrong. What happens at the Eye, well I know too much to speculate upon that one.

An almost prefect episode, with one stupid bad decision that almost ruined it for me.

GRADE: A- (Just for the love triangle)

I can’t wait to talk about all of this with Kyle and Christine this weekend on The Dragon Reviewed. Though I am also slightly worried as both seemed to think Rand being the Dragon would be bad, oops. If you want to see, or hear these non-book readers react to the reveal of the Dragon, then the latest episode should be up by Monday. Check out last week’s episode in the related section above.