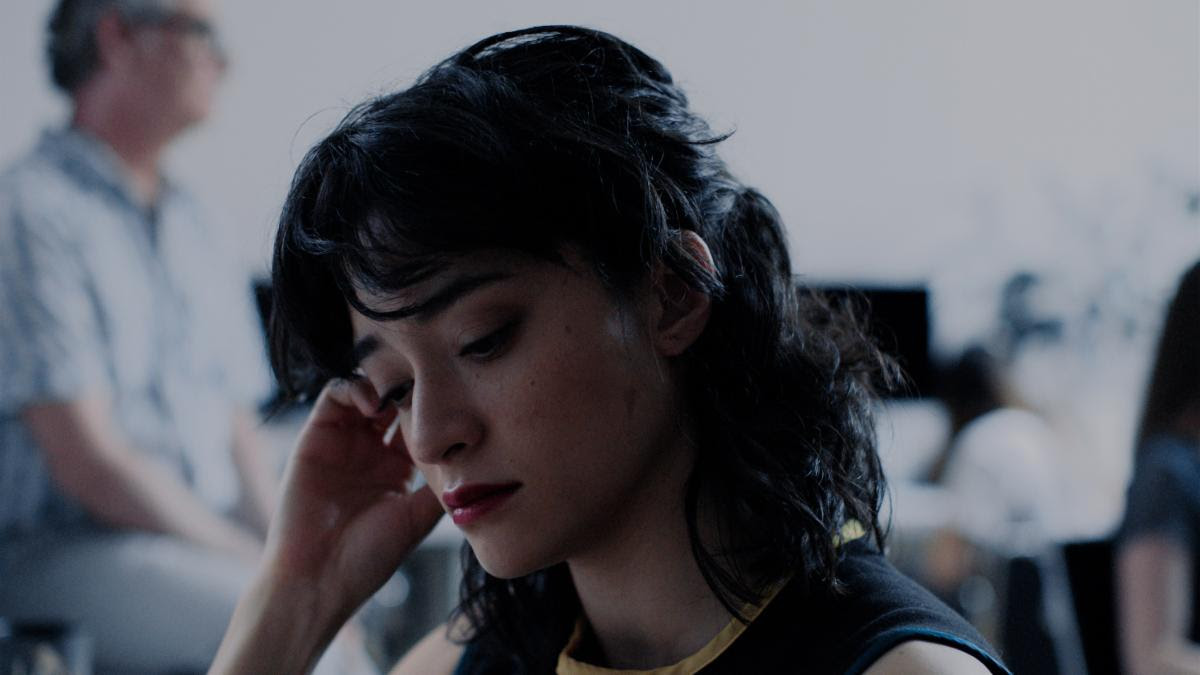 Reporting a sexual harassment incident is a high pressured situation for both the accuser and the accused.

For the accuser, it may seem the cards are stacked against them as protocols and bureaucracy favor the accused. Thus, leaving an awkward, stressful, and high-anxiety situation for the accuser.

In Doublespeak, the nine-minute short film displays a remarkable feeling to be in the seat of the accuser during an ongoing sexual harassment investigation.

A young woman grapples with the aftermath of reporting sexual harassment in the workplace.

The short film premieres as part of the Shorts Program 4 at the Sundance Film Festival tomorrow on Thursday at 10 a.m.

Read the full transcript of the interview below.

Gig Patta: Both of you, congratulations on your short film Doublespeak.

Hazel McKibbin: Thank you so much.

Gig Patta: How does it feel that the short film is being showcased at the Sundance Film Festival this year?

Hazel McKibbin: It’s amazing that it’s at Sundance. The film resonated with them so that they were giving it a platform. It’s an issue that’s super important to me. I feel really grateful that more people are going to see the film and hopefully it’ll resonate with them as well.

Gig Patta: Well, Hazel, let’s start with you first. Where did the original idea come from for you to do some Doublespeak?

Hazel McKibbin: It’s very much based on my own experience of reporting sexual harassment in the workplace. Actually, some of the dialogue is pulled from a recording that I have of my own similar meetings. When I went to film school to Columbia to do my MFA, it was the first one of the first scripts I wrote. It was the first film that I ended up making that Columbia.

Gig Patta: Angela, why did you want to be a part of this project?

Angela Wong Carbone: As soon as I read Hazel’s script, I knew instantly that it was something that I wanted to be a part of because the message was so clear. It tells the experience of this particular woman. In any universal way, I feel like doesn’t get a lot of attention, so that it deserves more exploration and discussion. It was an amazing opportunity.

Gig Patta: Angela, for you, it seems the subject was relatable. I’m not sure if you ever worked in a corporate atmosphere before.

Angela Wong Carbone: No, I haven’t really had many corporate jobs necessarily. There is something very universal about this experience, especially for women and other folks, who encounter things like this in their day-to-day lives. Personally, I drew from my own experiences, not necessarily sexual harassment in the workplace. But, being a woman in everyday life in this society. It was something that I was able to tap into with some elements of my own life, my own memories, and a universal feeling as well.

Hazel McKibbin: So I use the real name of the guy who harassed me. It was super important to me to keep anything that was relating to him true and not fictionalizes it. I condensed the dialogues because my own meeting was very long. The only parts that I felt able to fictionalize and dramatize were relating to Emma herself. The scene outside when she called her mother was fictionalized. Whereas the rest of it was pretty true to what actually happened, although condensed, obviously for the format.

Gig Patta: Hazel, was it difficult for you to revisit this subject for yourself?

Hazel McKibbin: It was. But, it was also pretty cathartic. Once we finished, it was hard and Angela can contest this. Actually filming it and going through it for me was hard, her as well, to relive that. Overall, the experience of making the film was super positive. I’m grateful to have been able to turn a dark period of a few years of my life into a film.

Gig Patta: Speak on that, Angela, talk about your experiences of going through this production.

Angela Wong Carbone: I feel really lucky that Hazel not only put together this really amazing script, but she was able to tell this story so well in so few words. Not only was I very lucky for that, but I was also extremely lucky for the crew and the cast that she put together. It was just beautiful, the way that everybody was motivated to telling this story and using their craft to be able to do that. It felt really synergistic on set. It was very comfortable. Hazel was very encouraging about finding the right tone and mood for the words for each scene. It felt like everybody was geared up towards the common cause, which was just to make this film as relatable and honest as they could.

Gig Patta: Angela, was it difficult to get into the headspace of Emma for the role?

Angela Wong Carbone: There were certainly a lot of considerations. The most difficult part was the situation you see in the film. It has years and years and layers of experiences, trauma, memories, and nuances between the relationships with the people in the office. You’re only seeing a very compressed nine minutes of it. Of course, there are Emma’s preoccupations about the future. From that angle, it was typical in the sense that there was a lot of complexity that we needed to incorporate within the character.

As a few people have noted in so few words, there were almost micro gestures at times. In terms of getting into that headspace, I did a lot of preparation. Leading up to it, we had the wizardry of Alison [Anderson], our DP, to make it all look and feel close to home. And I trained with my acting coach and my classmates. That was all I needed to jump in.

Gig Patta: Hazel. When you actually crafted the story for a Doublespeak, why is it so important to portray like the other characters to either be how you say unsympathetic or basically bureaucratic about the situation?

Hazel McKibbin: Well, mostly they were in real life. It felt the most real to me. They’re not malicious. They’re not out to get her. They’re holding up their end of the system in a way that is detrimental, to Emma. I was given a space of my own experience. In the beginning, it was hard for me to get in the mindset of the characters to direct, particularly the male actors., By doing that work, ultimately, it was a positive experience for me and kind of healing in a way.

Gig Patta: In terms of the subject for Doublespeak, did you imagine it to be a lot longer than nine minutes or nine minutes was the appropriate amount of time?

Hazel McKibbin: To me, nine minutes is perfect. The script was maybe 12 pages. I always wrote it to be pretty tight and as a little slice of the experience that dominated years of my life. This would be a really tough movie to watch if it was very long. The most effective way for me was to show that afternoon when it happened. So the script was written to be tight.

Gig Patta: Hazel, I understand this is your first film ever. How was that overall experience and do you want to do something like this again?

Hazel McKibbin: It was an amazing experience. I made the film in my first year at school with a lot of my classmates and friends on set. Once the film was finished, I realized I could never explain how the situation felt without telling anyone. By watching Angela portray Emma did that for me. More than anything, it made me sure that filmmaking is the best way that I can communicate. I would like to continue doing that.

Gig Patta: Let me wrap it up with the both of you. Being the fact that we would have loved to be at Sundance watching your short film, but everyone’s covering everything virtually. How are you staying sane and creative during times like this? Who wants to start?

Angela Wong Carbone: Actually, I did an incubator with ABC. So I recommend anybody out there, whether you’re a writer, an actor, or a producer to submit your work to competitions and festivals. I ended up submitting to the ABC talent incubator and it was an amazing learning experience. But, it also gave me something to do. While I was here at home and the industry has slowed down, I’ve been working on my writing. I encourage anybody out there to put together a writer’s group of friends or fellows, or whatever it is your creative outlet is. If you work together on something, it keeps things interesting. It keeps your muscle fresh. Yeah.

Hazel McKibbin: I’m also working, working on a lot on writing. I’m working on a feature. Then there’s pre-production for my thesis, a short film, at Columbia that’s shooting in July. So trying to stay busy in order to make the most of having space and time to write.

Gig Patta: Well, congratulations to both of you. It’s a very exciting time to get a short film into Sundance. That’s an achievement by itself. Thank you very much for this conversation.

Hazel McKibbin: Thank you so much.

Angela Wong Carbone: Thank you. Thank you for having us.

The short film premieres as part of the Shorts Program 4 at the Sundance Film Festival tomorrow on Thursday at 10 a.m.