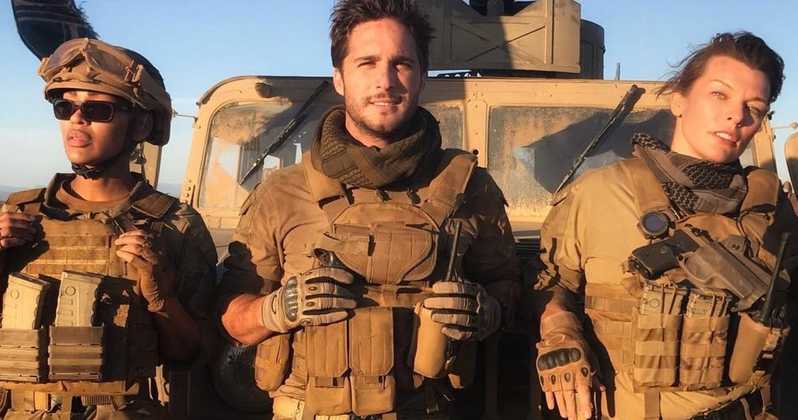 Sony Pictures Monster Hunter is now playing in theaters. The film is based on the popular Capcom video game that goes by the same name. It is directed by Paul W. S. Anderson. He is no stranger to adapting video game films to the big screen having directed several of the Resident Evil films.

In Monster Hunter an elite military force led by US Army Ranger Captain Artemis, played by Milla Jovovich fall through a portal and into another world. In this strange world reside dangerous monsters that rule their land with deadly ferocity. Struggling to survive they encounter a mysterious hunter, played by Tony Jaa. He has unique skills and experience that allow him to stay one step ahead of the powerful creatures. Part of this elite military force is made up of actors including TI Harris, Meagan Good, and Diego Boneta. As part of the release of the film, LRM Online had a moment to talk with Boneta via a phone interview regarding his role in Monster Hunter. During which time we talk about how those first action sequences were filmed. The real-life comradery that they formed as a group, and what it’s like to fight monsters that aren’t there. You can check it out below!

Emmanuel Gomez: Congratulations on your role in Monster Hunter.

Diego Boneta: Thanks, man. Have you seen it?

Emmanuel Gomez: Yes, just barely yesterday. So you play a ranger named Marshall. We don’t get to learn too much of him in the movie, so I was hoping you’d give us a little bit of insight on who he is.

Diego Boneta: Of course. Marshall is the comms guy out of the squad. It was really cool because part of the whole training of this, and even though we’re in the first act of the movie, Paul really wanted it to feel like we were a battalion, that we were a unit. During the rehearsals, we spent a lot of time together. We’re shooting this movie in South Africa, in the desert. In the middle of nowhere with all these extreme weather conditions. We really, really bonded. Marshall, like I said, the comms guy, second aboard after Milla, Tip, then Sergeant Marshall. And it was a lot of fun shooting. It was so much fun because we were in the actual location in the middle of nowhere.

I went straight from shooting Terminator to this movie. Even though both movies are in the
same kind of world, they were shot in completely different ways. Terminator was mainly all green screen. So the challenge was having to imagine everything. Paul wanted us to go to the actual locations and just create the monsters in CGI. He was like, ‘Listen, once you’re in the desert in Africa, in the middle of nowhere, and it’s a hundred and something degrees out, you all need someone to spray water or sweat on your face because you’re in it, man.’ I just love that attitude of let’s go, let’s shoot this. We shot this a while ago. We shot this end of 2018. So, two years ago.

Emmanuel Gomez: What is it like to film something that big? For example, how do you fight a monster that aren’t really there?

Diego Boneta: Well, so we were in the desert, in the middle of nowhere. Then Paul would explain the sequences to us. He would bring us his iPad and you’d see the pre-visual of what he wanted it the scene to be. So we could picture the monsters we were hunting, how they look, what they did, and where they were. Then yes, there was tennis balls. You have to imagine that. When you have a director that’s painting a very clear picture of what you’re doing, what you’re fighting, all that stuff, and being there. That’s the first time I’ve ever made a movie like that.

Emmanuel Gomez: You talk about that camaraderie between T.I. and Meagan Good, and then also Milla. So how do you guys rehearse for something like that too? Do you guys practice off set somewhere or was it always just one location?

Diego Boneta: Well, we all arrived the weeks prior to beginning with principal photography. We all got to hang out a lot. Paul just wanted us to feel like we had spent years together. So we’d hang out, we’d go to the movies. We had lunch and trained together. We did a lot of training together, a lot with army rangers. But also we just had fun, felt that there was a personal bond. Such so that it’s very common to finish movies and not talk to the actors or not talk to a lot of the people there because it’s just how it is. You go onto the next. We shot this two years ago, and we’re still all friends, and talking, and because that was real. The camaraderie was real.