Godzilla has never been a creature of consistent size. Early on, he was a modest 50 meters in size, and as recently as the 2014 flick, he was a large 108 meters in size. For reference, that’s well over 300 feet in height — which is pretty darn big. You need look no further than that Gareth Edwards film to see just how big that really is.

However, even the largest sizes pale in comparison to this latest iteration. This iteration is set to be seen in the upcoming Netflix animated film, Godzilla: Monster Planet. Its size? A whopping 300 meters.

Artist Noger Chen has taken to Flickr to give an updated look at how this new Godzilla’s size compares to the others, and here’s what he came up with. 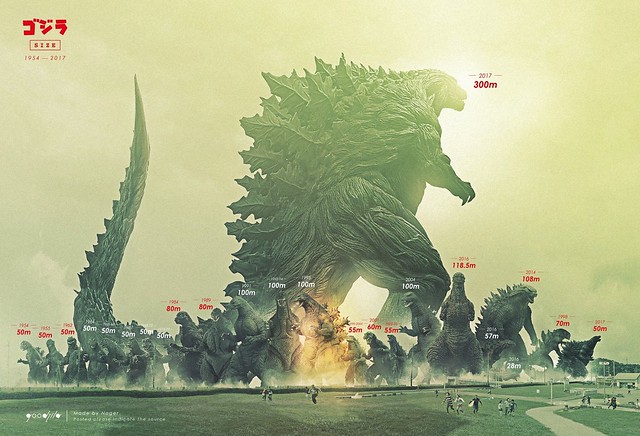 All we can say is: damn. That’s ridiculous. Some may look at that image and say it looks exaggerated in size, and while it may be a bit, it’s still a damn huge lizard, no matter how you look at it. At 300 meters, this means the latest Godzilla is nearly 1,000 feet in height. And as you an see, his height isn’t the only aspect in which he’s gotten larger. His bigger, bulkier, and just takes up a whole lot of area around him — enough to fill the same groun das countless other old Godzillas before him.

What do you think of this size here? Is it too big? Let us know what you think down below!

Zachary Levi Headed To Toronto To Work On Shazam!