Zack Snyder has been tied to the DC cinematic universe now for over 8 years starting with Man of Steel and now his cut of Justice League.  A fan-campaign in the works for over two years successfully got Warner Bros. executives attention to give Snyder an opportunity to complete the project that he had to leave before he could finish.  In the original plans the idea of multiple Justice League films were scheduled just like the Marvel cinematic universe. Since the theatrical release of Justice League and the disappointing reaction from fans those plans were nixed.  But now with the popularity of Snyder’s version of Justice League growing as we get closer fans are hoping that plans for a sequel might breathe new life.

At the 14:13 mark in the interview Zack Snyder addressed if there was a plan for a Justice League sequel. “You’re going to wait and see how the movie ends.  The movie is, to be clear, it is the movie I shot.  Whatever the intent was four years ago, going forward, that is the way the movie ends. You still have to wait how the movie ends, because it is very particular.”  Snyder mentioned during an interview on Ping Pong Flix’s YouTube Channel “As we get closer to release, I am going to say less and less. Frankly I am trying to be cryptic as much as possible.” It’s a very cryptic response and it looks like there will be an ending that opens the idea of a Justice League sequel.  While there are no plans right now for a sequel and the odds of that happening are really slim, there is still hope.  With Ben Affleck as the only actor to have moved on from the DC universe it wouldn’t be extremely difficult to get the cast back together.  As a fan of Zack Snyder’s work I am happy that he will finally get to see his vision of the Justice League. If there is a possibility of a sequel that would be amazing but I am not going to get my hopes up.  It seems that everyone including Snyder is in a good place regarding the direction of the DC cinematic universe so maybe it is a possibility.

While there has been multiple rumors of the Snyder Cut of Justice League it is still unclear of what the movie will actually look like.  The release of the film on HBO Max still hasn’t been decided except that it will be out during 2021.  I can only hope that HBO Max surprises us on January 1st with the first episode.

You can check out the full interview from Ping Pong Flix’s YouTube page below: 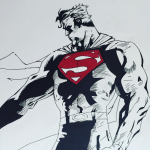