This week on the B movie docket is Death Race 2000. Welcome to week 9 of 50 B Movies To See Before You Die! This week the movie is an oldy but goody. It happens to feature Bill himself, David Carradine. We get to see him portraying the very colorful character, Frankenstein. Death Race 2000 features many unique characters. Among them is a young Sylvester Stallone. He gets to wave a Tommy gun around while attired as a Goodfellas character. The insane driving sequences don’t hold back. Death Race 2000 is petal to the metal madness. The plot is straightforward. Just read this synopsis: In the year 2000, America is a totalitarian regime on the brink of collapse. The most popular sport in this dystopia is the Transcontinental Road Race, where teams earn points for logging the fastest time and for mowing over the most innocent pedestrians in the process. This year’s competitors include Frankenstein (David Carradine), who is rumored to be more machine than man, and the tough-as-nails “Machine Gun” Joe Viterbo (Sylvester Stallone). Some have a plan to stop the race.

That’s a little long-winded. I’ll simplify it by calling the film “Murder Race America”. For a movie that came out over forty years ago it does a masterful job at defining the early B movie genre. Yes, there is lots of blood and guts, but there is also a gravity to the story that keeps it grounded. The plot feels like one extended sequence from Stanley Kubrick’s 1971 film A Clockwork Orange. Peppered in are characters that would be just as home in a Rob Zombie film. Their aim is to race across America, racking up points by turning pedestrians into roadkill. One would not be incorrect thinking the makers of the Twisted Metal video game franchise were inspired by the film. Think The Purge at a racetrack and you’re on the right path. 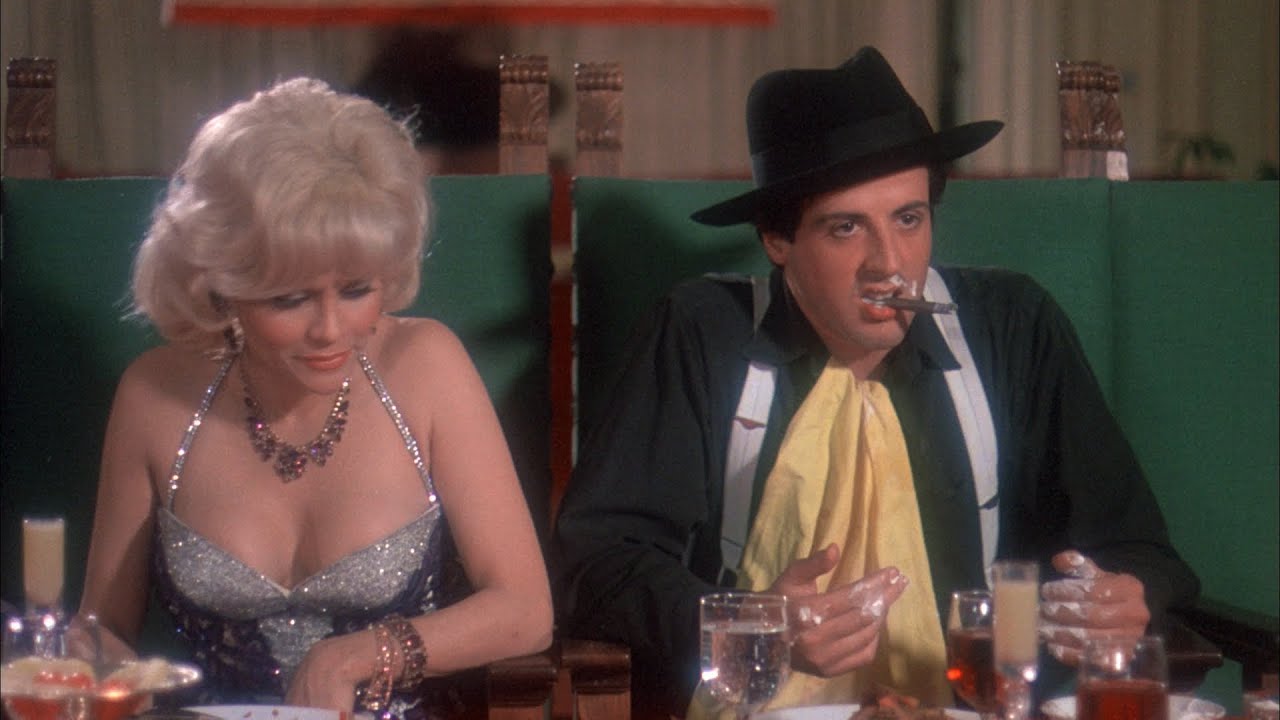 Death Race 2000 shows an America where people have embraced their base desire for blood, guts, and gore. There is one hilarious moment in which a fisherman confuses Stallone’s Machine Gun character with Carradine’s Frankenstein. Before the mixup sits in, the fisherman espouses his great fandom for Frankenstein. Like the fisherman, much of America roots for the Death Racers as if they were modern-day NBA superstars.

It’s 200mph of murder, mayhem, and human roadkill. Along the way there’s a compelling narrative highlighting the characters’ motivations. It’s interesting how well the filmmakers did at balancing the more insane moments with characters that have a surprising amount of warmth to them. Carradine’s Frankenstein immediately comes to mind as a great example. He has an interesting arc that I will not spoil here. The race isn’t just about who can get from point A to B the fastest. It’s also about how many points each racer accumulates doing so. 10 points for a woman. 40 points for teenagers. 70 points for toddlers. Their aim is to kill them however they can. There are cars tricked out with spikes on their hoods to impale pedestrians. But the odds are stacked against the racers. There are factions working to sabotage, eliminate, and take the racers hostage.   The competitors are coming from every angle here.

A Vision For America The world of Death Race 2000 is ludacris. In a way it is a bizarre mirror of the society we live in today. There are thousands of rabid fans ready to fill the stands to spectate the Death Race. The maniacal audience even begs for the races over a better alternative. The world is populated by madmen willing to risk life and limb for the races to continue. In the end the fans’ bloodlust cannot be satiated. Death Race 2000 is a sterling example of what B movies can be. All of the mayhem on display serves to tell the greater story. And there’s plenty of zany characters afoot to keep you interested. It’s not a high brow B movie, but it is one that aims to make you think when watching. What kind of world would award points for killing teenagers with cars? I don’t know. But the way things are going, we might all find ourselves in some dystopian future where our outlet is the Death Race. Of course, I am kidding. Death Race 2000 is a must-see for any B movie fan.

Have you checked out LRM Online’s official podcast feed yet The Genreverse Podcast Network? This includes our premiere podcast The Daily CoG, Breaking Geek Radio: The Podcast, GeekScholars Movie News, Nerd Flix & Chill, Marvel Multiverse Mondays, Anime-Versal Review Podcast, and our Star Wars dedicated podcast The Cantina. Check it out by listening below. It's also available on all your favorite podcast apps! Subscribe on: Apple Podcasts |  Spotify |  SoundCloud | Stitcher | Google Play
Tags: 50 B Movies To See Before You Die Death Race 2000
Read Previous

How You Can Get This Sexy Darth Vader Blanket…For Free! | LRM Game Show Announcement

Tenet Will Be A HUGE Gamble For WB — Will Movie Bring In A New Era Of Filmmaking?