Raya seeks the help of the legendary dragon, Sisu. Seeing what’s become of Kumandra, Sisu commits to helping Raya fulfill her mission in reuniting the lands. Featuring Kelly Marie Tran as the voice of Raya and Awkwafina as the voice of Sisu, Walt Disney Animation Studios’ “Raya and the Last Dragon” will be in theaters and on Disney+ with Premier Access on March 5, 2021. © 2021 Disney. All Rights Reserved.

In the same breath that we talk about some Disney Animation Films like Frozen and Moana will be Raya and the Last Dragon. This all-new fantasy-adventure animated film is set to be released simultaneously in theaters and on Disney+ with Premiere Access on March 5th, 2021.

Ahead of its release, Disney Animation has released a new trailer and poster for Raya and the Last Dragon. You can check it out below!

“Raya and the Last Dragon” takes us on an exciting, epic journey to the fantasy world of Kumandra, where humans and dragons lived together long ago in harmony. But when an evil force threatened the land, the dragons sacrificed themselves to save humanity. Now, 500 years later, that same evil has returned and it’s up to a lone warrior, Raya, to track down the legendary last dragon to restore the fractured land and its divided people. However, along her journey, she’ll learn that it’ll take more than a dragon to save the world—it’s going to take trust and teamwork as well. 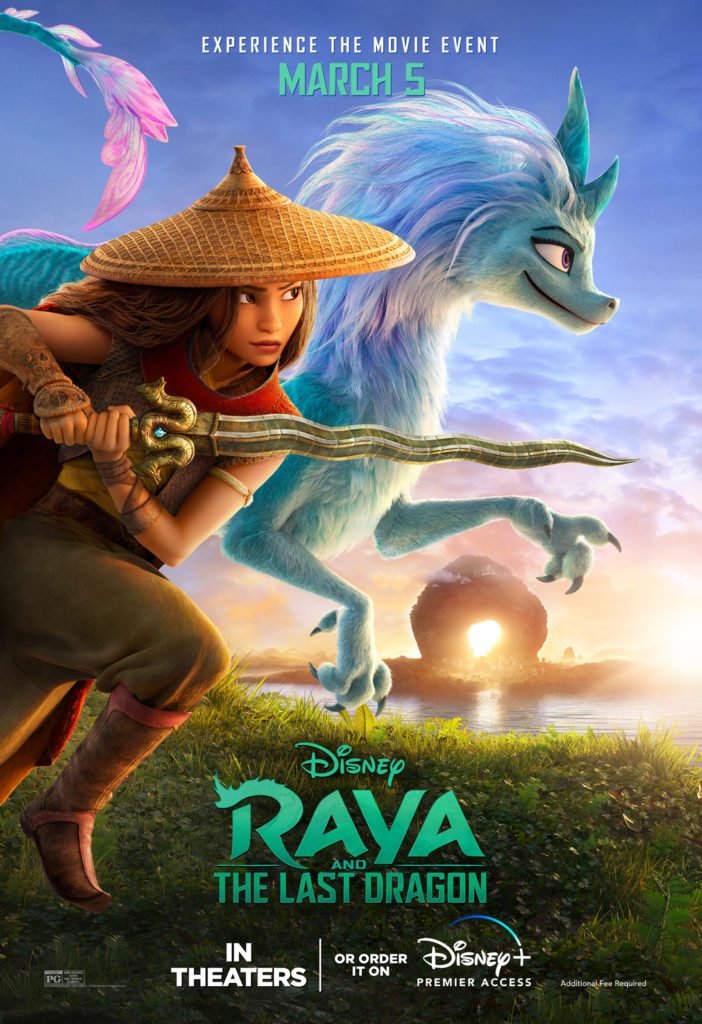 The film has an awesome voice cast that includes Kelly Marie Tran as the voice of the intrepid warrior Raya. Awkwafina as the legendary dragon, Sisu. Gemma Chan as Raya’s nemesis, Namaari. Daniel Dae Kim as Raya’s visionary father, Benja. Sandra Oh as Namaari’s powerful mother, Virana. Benedict Wong as Tong, a formidable giant. Izaac Wang as Boun, a 10-year-old entrepreneur. Thalia Tran as the mischievous toddler Little Noi. Alan Tudyk as Tuk Tuk, Raya’s best friend, and trusty steed. Lucille Soong as Dang Hu, the leader of the land of Talon; Patti Harrison as the chief of the Tail land; and Ross Butler as chief of the Spine land.

The film is being directed by Don Hall and Carlos Lopez Estrada. With Paul Briggs and John Ripa co-directing.Serving as producers on the film are Osnat Shurer and Peter Del Vecho. The writers are Qui Nguyen and Adele Lim.

Along with the fabulous trailer and poster, Disney Animation also released these great images from the film.

What do you think of this fantastic trailer for Raya and the Last Dragon? Let us know in the comment section below!

Disney Animation Studios’ Raya and the Last Dragon will be released simultaneously in theaters and on Disney+ with Premiere Access on March 5th, 2021.

Angela Bassett On Chadwick Boseman Not Being Recast As Black Panther